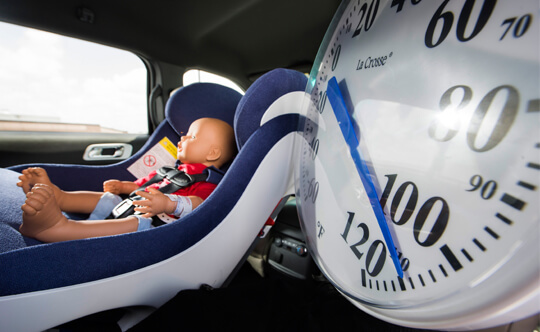 Here’s what you can do if you see a child or dog locked in a hot car.

Florida Governor Rick Scott signed a bill into law in 2016 granting civil immunity to persons that intervene, and take what steps are needed to rescue a dog or person from a hot car. As part of the law:

1. First try to find the owner of the vehicle.

2. Get a witness that will corroborate your story

If these steps are unsuccessful and the animal or person exhibits signs of overheating, a person can break into the car by force, and be protected from prosecution by the new law, Florida Statutes, F.S. 768.139.

After just one hour, in Florida, temperatures can reach easily 106 degrees or more. This can cause organ failure and death in animals and children.

A common mistake when receiving a ticket from a police officer is to pay the ticket. Paying the ticket is an admission of guilt, and often can compound issues if the driver has additional moving violations in a five year period, or commits a crime while operating a motor vehicle. Additionally, paying the moving violation can result in points, or convictions accumulating in your driving record.

Florida Statute 322.264 states that a habitual traffic offender is any driver that pleads guilty to any of these three listed below within a 5-year period, arising out of separate acts:

1. Voluntary or involuntary manslaughter resulting from the operation of a motor vehicle;

2. DUI offense of any kind, drugs or alcohol;

3. A felony in the commission of which a motor vehicle is used;

4. Driving while license is suspended or revoked (DWLSR);

6. 15 convictions of moving violations in which points have been assessed within 5 years;

Very easily, a driver can accumulate three convictions for DWLSR within a five year period.

Here is a good example. A driver receives their first ticket for DWLSR without knowledge, then the ticket is paid without any dispute, as instructed on the ticket. The second and third DWLSR the driver also pleads guilty, because the driver is not advised of his rights, and they are scared because one had became a criminal offense. When this occurs within five years, the Department of Highway Safety and Motor Vehicles will suspend the driver as an HTO. This suspends driver’s license 5 years, possibly upgrading the future charges allowing the state to sentence the driver to jail or prison time.

Give us a call at Thomas Law, P.A. with any of your driving questions. We can help with the HTO process and possibly reverse previous convictions so that you can get your driving license back.